It was first started in the 1920`s, and mainly follows that format, in some places to the present day.

Since the 2000`s some promoters of these fitness programmes, have changed its purpose to a more general form of exercise and a range of dance type moves, with the use of a pole for more competitive elements of dance and acrobatics.

There are now competitions and championships throughout the world that are open to every individual.

The movements and gymnastic exercises that are used now, are a lot more technical than in the early days.

The benefits are to increase core and general body strength.

Where is it Best to Learn

The apparatus used is now available to anyone for home use.

Clubs have several sets, where classes of pupils are going, to learn the exercises. For everyone who wants to learn these types of moves.

It starts in general with squats, sit ups and push ups, which leads to climbs and inversions, where the strength you will gain from the exercise for the gripping, becomes necessary, as you work your way through the programme.

These championships, started in Amsterdam in November 2005 as Miss Pole Dance World.

China now has special themed routines, incorporated in some of their circus and cabaret performances.

Men are increasingly using the exercises in their fitness programme, as it adds to their flexibility, strength and balance.

In China the National Pole Dancing Championship of 2007 was won by a man.

It is said that these exercises, for a woman, in a none sexual environment, just for the dance and in an aerobic, athletic way is greatly empowering for them.

Also the toning and trimming effect that is achieved, allows these women to feel great about their positive power.

Another point to consider, pole dance enthusiasts are trying to get it added as an Olympic sport, now there is a question. What do you think?

They have parallel bars and rings on ropes for athletic prowess.

Yet some polers train as hard and are as professional as the athletes in their training programmes. 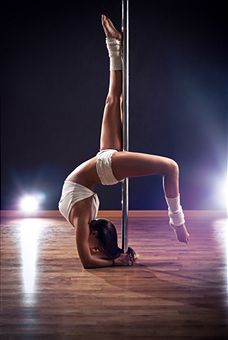