Over many years there have been a great deal of novelty and dance crazes. Some have stood the test of time, and carried on with a few variations, others have just faded into obscurity.

Some of the rhythms though were preserved for classical music.

The tempo of these dances has also evolved into a standard framework that formed the movements of Baroque and some classical works.

In the early 1920,s the world was swept by a string of Novelty and dance crazes, such as the Jitterbug and the Charleston, with the most significant being the Tango from Argentina which became a standard, in many a dance repertoire.

These were also frequently seen in Hollywood movies. The dance came to enhance the movie, being a dance that almost everyone could associate with, at the same time, it increased the popularity of the dance, by being on film.

Not Just a Dance Craze

The Tango was the first of a series of 20th century Latin music, that included the Merengue, the Samba, also Mambo, Rhumba and the Cha Cha Cha.

Each of these styles became massively popular, and were used as the standardised styles, in the repertoire of Western novelty and popular dances.

From the 50,s to the 70,s frequent new dance styles emerged, created often by the African-American dancers who visited the clubs and disco`s in the major U.S. Cities.

Amongst the many dances of this period were the Madison, the Swim, and the Twist, the Mashed Potato, the Frug, and the Shake,  the Watusi, and the Hitchhike, the Pony, the Dog and the Chicken.

As music and dance become more of an everyday social side of many cultures, with their novelty and popular dance crazes. The variations of these, which also includes the ones below, will continue to be explored, as no one dance, will please all people.

It is believed that there are 4956 dances of the world. I have not checked them though.

All types of dance
exercise 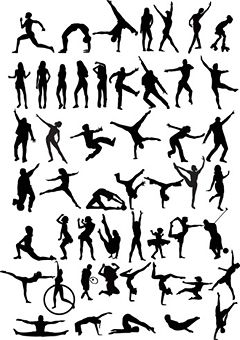