The foxtrot dance also known as fox trot is a smooth delightful dance, characterized by long flowing and connecting movements across the dance floor.

It is believed to be named after Harry Fox, Vaudeville acter and dancer.

Usually danced to big band music, it gives the feeling of beauty and refinement.

This dance is similar in look to the waltz, although danced to a faster rhythm.

It was developed in the 1920's, became hugely popular in the 1930's, and is still being practiced today.

This popular dance has been attributed to African American dancers as the source.

Where Vernon Castle, and Betty Lee saw the dance, while being danced by negroes.

Castle had personal knowledge, of this for fifteen years, at an exclusive club. Later he gave the dance, its signature grace and style.

The Slow Foxtrot is a favourite among many ballroom dancers, as it was to the smooth dancing, of Fred Astaire and Ginger Rogers.

At its introduction, the foxtrot was initially danced to ragtime

From the beginning and through the 1940s, the foxtrot was certainly the most popular fast dance, also the vast majority of records produced during those years were foxtrots.

Even though the waltz and tango, were very popular, they never overtook this dance.

Also the popularity of the lindyhop , did not affect the foxtrot's prominence, as the foxtrot was also danced to the same records used to accompany the lindy hop.

When rock and roll first appeared in the early 1950s, record companies were unsure as to what type of music, would be most suitable to this style of dance.

Initially Decca Records labeled its rock and roll records as foxtrots, most exceptionally Rock around the Clock by Bill Hayley and The Comets.

This recording by some accounts, went on to sell more than 25 million copies.

Rock Around the Clock could be believed as the biggest selling foxtrot of all time.

During time the foxtrot split into slow and quick versions, now known as foxtrot and quickstep respectively.

In the International Standard category of ballroom dances, these dances were then known as Slow Foxtrot, or Slowfox.

These names are still in use, to differentiate them from other types of foxtrot dances.

“After all, Ginger Rogers did everything that Fred Astaire did. She just did it backwards and in high heels.”
~Ann Richards~ 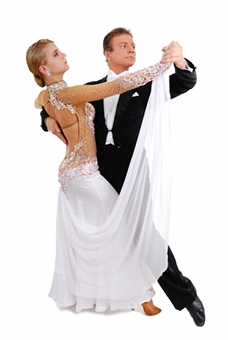