Everyone Should Dance
Modern Jive

Everyone should dance, if you can walk you can dance and this is my favourite. Easy footwork, around 22 moves in the beginners classes, these can keep you going for quite a while, if you like to vary the moves, in their simplyfied way they give you a good basis for more tricky moves.

Probably 500 in the intermediate range, some as variations and a combination of the beginners. You can of course vary and adapt moves to suite your own style and repertoire.

Then there is the advanced, where you will do a range of dips and drops, with also more complicated combination moves.

Modern Jive, also known as Ceroc, is a fast moving type of dance, taken from the jitterbug by the American Gi`s stationed in France during the early 1940`s.

Modern Jive, is very energetic, ideal for those that like a lot of movement, with great fitness benefits.

Everyone should dance and without realising it you give yourself and your partner a good workout routine, which also creates an amazing sense of fun.

It was derived from many other dances including French Jive, Lindy Hop, Swing and Rock & Roll, the main change being simplified footwork which makes it more accessible to beginners.

The words modern jive distinguishes it from ballroom Jive. Where you would have a range of steps and kicks, for more formalised moves.

The footwork and hand patterns are similar to Merengue, but with the inclusion of outward turns, multiple turns and dips.

It is danced to almost any music typically 60s through to modern popular music.

It does not require special clothes, although for both men and women, smooth soled shoes that are easy to turn and spin in, are highly recommended.

Everyone should dance. Modern jive is, like many partner dances, traditionally a male led dance. Despite this tradition many female dancers today also learn the lead role. Even though few male dancers learn the follow role.

This is usually because modern jive events have more female participants than male ones, and many males are less comfortable engaging in a partner dance with a member of the same sex, than females are.

It is suggested that Modern Jive, is suited to any type of music, but it best suits a tempo ranging from around 100 - 150 beats per minute.

Outside the UK, modern jive is less common, although it is very popular in Australia and New Zealand, and is slowly spreading to other areas of the world.

The name 'Ceroc' is said to derive from the French "C'est le roc" (it's roc), used to describe rock n' roll dancing in France.

The term French Jive is occasionally used instead, reflecting the origins of the style. That everyone should dance.

“Want to spend lots of time dancing with ladies? Impress them with how good they are!”
~ Gerald Cosby ~ 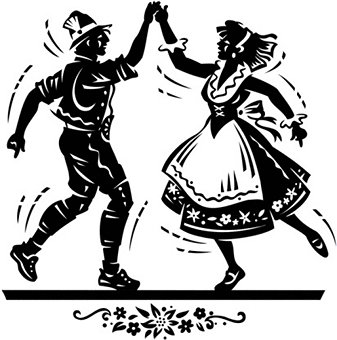