Belly Dancing for Your Temple
Your Body

Belly dancing according to early paintings and sculptures, has been  around since 500 BC.

It has been Westernised since the romantic movement of the 18th and 19th centuries, when artists of the time depicted images of harem life in the Ottoman Empire.

Belly dance is a general name, as the whole body is involved, with the emphasis on the hips.

Many different forms of the dance are seen depending on the country or region as is also the case, with the costumes they wear.

Large numbers of people gathered to watch the performances of these dancers, when they visited trade fairs in the Middle Eastern Countries.

The dances then were often known as Oriental or Eastern dance.

The movements in this dance involves the isolating of different parts of the body, shoulders, chest, stomach and hips.

Posture and muscle control was also considered to be very important.

There are many styles, where they have different phases to specify the movements.

From a spectators perspective there are certain elements to look for, where the focus is mainly on the hip and pelvic area.

Shimmy or shiver. A vibration of the hips. In a simplified way, moving the knees past each other at high speed.

Hip Hits. Moving the hips sharply out from the body.

Undulations. Fluid movements for the hips or abdominal and chest muscles, in a rotating or circular movement

Even rippling moves from stomach to head, like waves in the sea.

An exercise of dance for every part of your body.

Belly dancing is suitable for all ages, and both sexes, for most body types. It is a weight bearing but none impact exercise, where individuals can practice on there own.

For older people it improves flexibility of the torso, the isolations and the exercises help with the prevention of osteoporosis.

Due to the full body undulations, these are beneficial to the spine, and strengthens the entire column of spinal and abdominal muscles.

Upper body, arm and shoulder muscles are strengthened by dancing with a veil.

Fingers work independently and gain strength by playing the zills,

The long muscles of the back and the leg muscles are strengthened by hip movements.

Dancing with a Veil 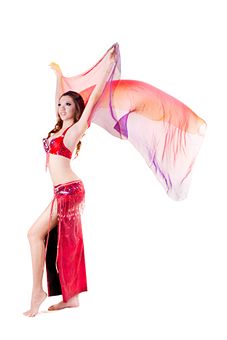