Morris Dancing to Ensure
The Start of Summer

Morris dancing is a form of  English folk dance, usually performed in a group of six or eight dancers, but can also be danced by one or two people.

It is a choreographed dance, that is danced in set routines, they wear bell pads on their shins, and may also wield sticks or swords, or they use handkerchiefs to accentuate their arm movements.

In a single or pair dance, these dancers could also dance around, or across clay pipes, laid out as a cross.

This dancing has English records dating back to 1448.

It was danced by both men and women, either mixed or individual groups.

One of the earlier dances, was in the Lord Mayors procession in London.

Even though it is thought of as an English activity, it has a large following in America, also Canada, Australia New Zealand and Hong Kong, and many smaller groups on the continent.

The dances died out at the beginning of the 19th century , then a long time later, the 20th century by all accounts they were revived again around 1923, where some, of the English counties started their own troupes.

Often these days the Morris dance celebrations start on 1st May, to mark the beginning of summer.

They are danced in towns and villages, at fetes and carnivals also other private functions.

Many of the Morris dance groups, have an individual dance that they create and perform on these occasions, as well as the many general dances.

Also at Christmas they might have a mummers play. These they perform in local pubs, in aid of a charity of their choice.

The music for these occasions is usually provided by the other members, who will be playing an accordion, a concertina, maybe a fiddle, sometimes a whistle and drum.

A Melodian or an Anglo concertina, could also be played. These instruments play a different note on the push or pull of the bellows.

A new dance for 2017. Developed from a workshop the side held in the Autumn. This unique dance is based on the collection of material from the village of Snaith. One of the dancers wears a set of cows horns and proceeds to run through the dance at regular intervals. The tune used is the Sherwood Hornpipe written by Malcolm Smith. 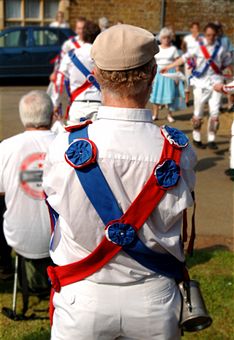