Lambada a Film of the    Same Name

The Lambada dance became internationally popular in the 1980s, in Latin America and Caribbean countries.

It has been adapted from dances such as carimbo, forro, Maxixe, merengue and salsa.

On March 16 1990 a film was released, about, Nissan, a princess of a Brazilian tribe who comes to Los Angeles, to stop an American corporation from destroying her rainforest home.

The film called Lambada, because it was thought, there would be a new dance craze.

It was a hastily made, bad film, that got involved in legal battles with another film of the same name.

A Range of Styles

The dance craze did not happen although various dances were derived from the dance, these were-:

Zouk-Lambada also Brazilian Zouk which is danced to the zouk music, or music with a zouk beat .

The Caribbean Zouk dance style, which is historically related to, but very different from the original dance style.

It is often known as Porto-Seguro style and the Rio-style. Also called Carioca

Versions From Other Countries

One version of Brasilian Zouk, called Mzouk was created in Palma, Spain.

It is known as zouk-love in the Netherlands.

Soulzouk was developed in 2005 by a Chinese teacher from Rio, Brazil, but was also called zouk freestyle

Lyrical Zouk invented by Lindale Thompson, is a style from the London Lambada Zouk Scene.

To Watch or Dance

In its original form it is danced with arched legs, taking steps from side to side, turning or swaying but no back to front moves.

The hips move first, followed by the rest of the body, in what is a very sensual dance.

The partners are connected in different moves, some by eye, leg, arm, shoulder and head.

Unlike Salsa, which is led with the hands.

In its most popular time, it became associated with men wearing long trousers, while the women wore swirling short skirts, and thong style underwear.

What does it mean

The word lambada means "strong slap" or "hit" in Portuguese. As a dance form, it is of obscure etymology. In Portuguese it may refer to the wave-like motion of a whip. This flowing wave motion is reproduced by the dancers' bodies, and is one of the main elements that distinguish this dance from other Latin dances

The curve is more dangerous
than the sword.
~ Mae West ~ 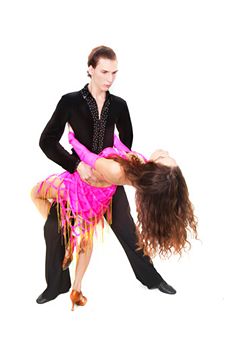