Contra dance first came into being in the late 17th century, but it was named so by the French in the early 19th century from its original name, country dancing, many thought because of this, it originated in France.

Also French dance styles in the 17th century. were sometimes described as New England folk dance or Appalachion folk dance, contra dances can be found around the world and have much popularity in North America and the United Kingdom, where weekly or monthly dances and annual dance weekends are common.

It was danced in America until around the mid 19th century, when it became more associated with square dancing.

In the 1970`s  Sannella and other callers introduced movements from English country dances which featured symmetrical dancing, it became more of an enhancement for the future progressive moves.

The moves of the dances were set to be danced, in 4`s or 6`s, in long lines, where each person started opposite their partner, alternately along two lines,  the  pair danced along the lines, and around the room, until they had danced with every other person in the room.

Gender-free contra dancing started in the 1970s, with the Boston Lesbian and Gay Folk Dance

Generally a leader or caller describes the dance before the dance begins, everyone moving without music. The participants then dance the moves  to music, this is usually live music.

Dancing around, with the caller still describing the moves a few times, until the moves are known, this also helps the man, as he does not have to remember all the moves for himself and his partner.

They dance on for 10 to 15 minutes, where they will then start another dance, and begin all over again.

The fiddle is considered the core instrument, though other stringed instruments are used.

Sometimes people line themselves up with a partner for an individual dance in the Interval, where they may dance a waltz or a polka.

Contra dance routines do not normally have set footwork, they move around to their own interpretation of the move, usually a walking or skipping step, to the music.

Irish, Scottish, old time, French/Canadian folk tunes are the most played but many more are played

In more recent times younger dancers, have started to do crossover contra or Techno contra, to hip hop and other, more modern music.

~It's amazing to have so much fun with people I have never met before.
~Anon~ 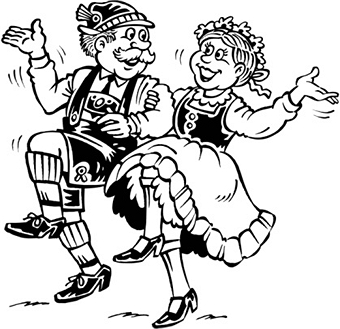